After testing Slideshow and Android on Intel Compute Stick, I decided to have a look at another device sitting on my desk – Raspberry Pi – and analyze it from the point of usability for digital signage with Slideshow software.

What is Raspberry Pi?

Raspberry Pi (official webpage, Wikipedia) is small popular single-board computer with ARM processor (same architecture as the most of Android devices). It can be used for various automation, internet-of-things and educational applications. Thanks to its active community, you can find many tutorials online.

The official target price of all Raspberry Pi “Model B” versions (which are the most popular ones) is 35 USD at the time of the release of the particular version. The current cost including power adapter and micro SD card is around 50-55 EUR, but feel free to check your local electronic shop for the exact price.

Since the release of the first model in 2012, several improved model has been released, with better connectivity and performance. At the time of the writing of this blog, the newest one is Raspberry Pi 4 B, released in June 2019. For the tests, I will use the two most powerful models:

Installation of LineageOS to Raspberry Pi is quite easy, almost the same as any other OS for Raspberry Pi. Download the image, unzip it, flash it to MicroSD card (size 8 GB+) with Win32DiskImager, insert it to Raspberry Pi and power it up. After some time (cca 3 minutes on RPi 3B+, 1.5 minute on RPi 4B), you will be greeted by Android setup screen, where you can pick your language, time zone and other basic settings.

The user interface (UI) on RPi 3B+ felt a little bit slow, sometimes one had to wait a second or two for Android to react on a click. On RPi 4B, the UI felt much smoother. Installation of Slideshow was without any problems on both versions, as well as the basic setup and upload of files through web interface. It took few seconds for the Slideshow interface to render all panels, but after everything was loaded, RSS news displayed as moving text (which can be laggy on slower devices) were smooth.

As this build doesn’t support hardware video decoding (although Raspberry Pi as a hardware supports it), all videos are decoded using CPU. Both RPi 3B+ and RPi 4 managed to play 720p H.264 video without lags, 1080p H.264 video was lagging on RPi 3B+ and smooth on RPi 4B.

From the point of digital signage, there are two big problems with this distribution:

Emteria.OS is a commercial Android distribution aiming at industrial usage, developed by German company emteria GmbH. They offer Android images based on Android 7.1 for Raspberry Pi 3 B and B+ among a few other single-board computers. They don’t support Raspberry Pi 4 so far and the provided Android image doesn’t boot on this version, that’s why I tested it only on Raspberry Pi 3 B+.

It is important to note that emteria.OS is a commercial product. You can use their free evaluation version for testing (which is what I did), but it is not allowed to use it for commercial purposes, it automatically reboots every 8 hours and there are occasional pop-ups informing you that you are running evaluation version. For stable operation, paid Personal or Business license is required.

Installation of emteria.OS starts with free registration on their website and downloading their installer on your computer. After opening the installer, you can pick which image you would like to install (for RPi 3 in this case) and on which drive (micro SD card) you would like to flash it. After flashing the image on the card, insert it to your RPi, power up and let it boot.

The user interface was fairly responsive, with occasional slowness – subjectively faster than LineageOS on RPi 3B+, slower than LineageOS on RPi 4B. There weren’t any problems with installing and running Slideshow. Moving text and 720p H.264 video was displayed smoothly, 1080p H.264 video was lagging, very similar to LineageOS, so it seems that neither emteria.OS supports hardware video decoding.

The default screen resolution is 1280 × 720 and cannot be changed through the Android settings. Although according to some posts on emteria.OS forums, you can change the resolution by directly editing the configuration files on the micro SD card through your computer, I didn’t manage to set Full HD resolution – both framebuffer and the HDMI resolution as reported by my screen stayed at 1280 × 720. Even if I managed to set Full HD resolution, there is no guarantee it would be stable because of low GPU memory and performance.

RaspAnd is a distribution for Raspberry Pi 3 B and B+ based on Android 9. There is 9 USD fee for downloading the image, without any explanation about licensing and no evaluation or trial version, I decided to skip testing of this distribution.

There are also other developers who used their free time for building Android image for Raspberry Pi (for example https://www.raspberrypi.org/forums/viewtopic.php?f=73&t=232234), but due to high number of known issues, I don’t think they would be right fit for this test.

I took advantage of testing various distributions of Android on Raspberry Pi and run some benchmarks on it. I used Geekbench 4.4 so I could compare it with Intel Compute Stick.

During the benchmarks, Raspberry Pi was without a case and without any active or passive cooling. The numbers could be a little bit better with active cooling (small fan), but that would add an unwanted noise to otherwise completely silent device. The difference between the two distributions on RPi 3B+ was low, but still measurable – emteria.OS was around 7% better at CPU load, LineageOS was around 3% better at GPU load. RPi 4B performed much better than RPi 3B+, which is consistent with the feeling I had while using the UI and also with other benchmarks. 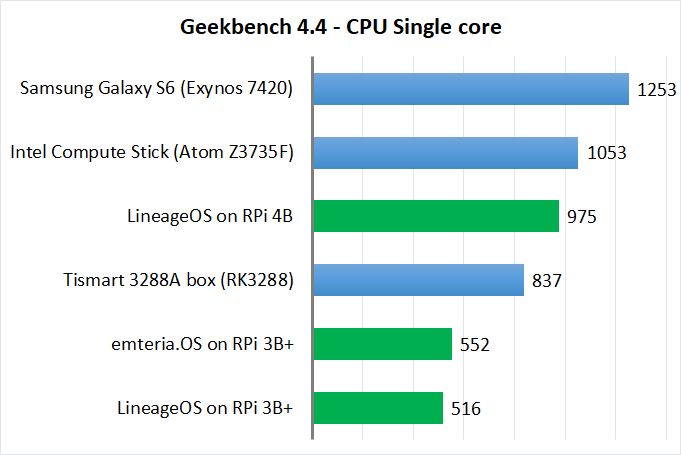 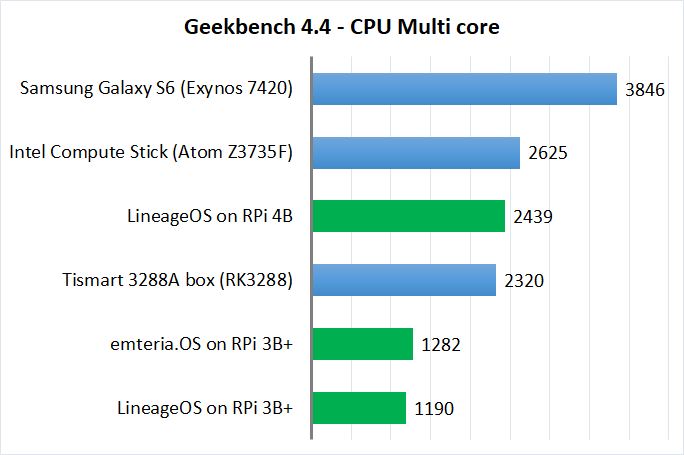 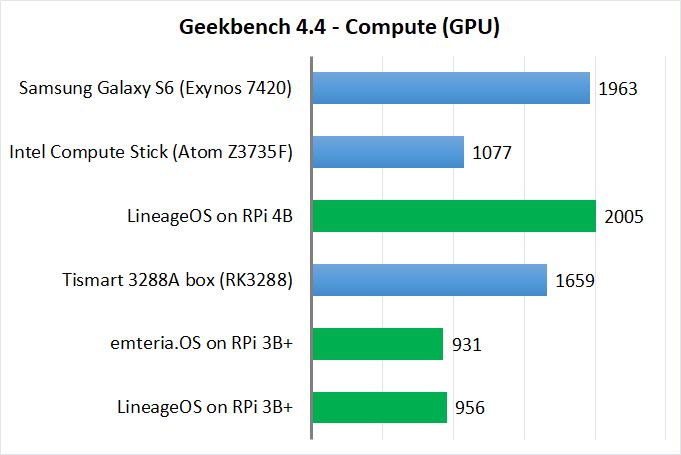 Results for Raspberry Pi, Intel Compute Stick and Tismart 3288A box were measured as a average of two runs. Other results are a courtesy of Geekbench results database.

As I am familiar with the high number of various well-done projects for Raspberry Pi using Linux, I expected that there would be at least some Android distributions for Raspberry Pi with working hardware video decoding, maybe even taking advantage of the 4K support on HDMI 2.0 on Raspbery Pi 4 B. Although the authors of the distributions mentioned above did one hell of a job combining Android with Raspberry Pi bootloaders, I have to say that these distributions are aimed at different usage than digital signage, mostly due to the licensing and issues with hardware video decoding and output resolution.